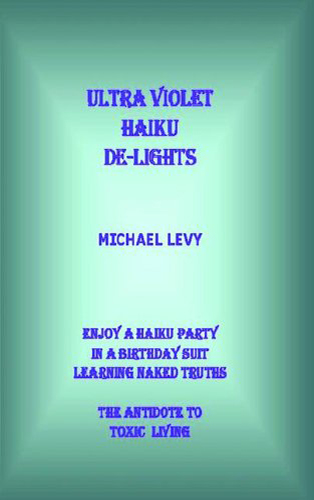 Circle
The 361 Degree
The mystics point

Refreshing three line haiku poems to ease the toil and lift the burden of stresses and strains of modern day living. Each poem projects images that induce inspiration and humor. Can you afford the time to read them?

Ultra – Violet Haiku is one of the most profound and meaningful haiku publications in many years. It has taken Michael seven years to compose and compile. Astronomers have to put ultraviolet telescopes on satellites to measure the ultraviolet light from our sun and other stars / galaxies. So why not study the way we live our lives on earth with ultraviolet haiku’s, Levy style. Many scientists are involved in observing the invisible universe of ultraviolet light, because they are the shortest and hottest wave bands. The sun and most of the other bright stars in the cosmos give off large amounts of ultraviolet energy.

Now you have the opportunity to study ultraviolet haiku that peers behind the visible actions of humanity and reveal the reality in the true light of day. Behind the greed of large corporations, the mis-information in medical science, the shenanigans in politics, the sensationalism in the media, all the shams and masquerades of society in general, resides the true character that defines a human being. By reading Ultraviolet Haiku, you will be able to observe how you are affected by all the mish-mash of opinions, making you more aware of the roles you play out in your daily life. It will transport your focus into the heart of nature and allow you to comprehend the reality of natural balanced joys, that really make your life, a walk in paradise park..Enjoy